20% Off Your First Order (limited time only)

Create your account and save 20% on your first order!

You are here: Home / Our Story / Our Team

We don’t have to tell you that there are almost limitless “natural” hair and skincare products on the market these days, but Beauty and the Bees stands out because we’ve been creating our locally-sourced, eco-friendly products for almost three decades, generating thousands of positive testimonials and almost fanatical customers. We did it first, and we do it better by sticking to our belief in personally testing every ingredient we use and in our commitment to a small-batch, handmade approach to beauty products.

For anyone who thinks differently or was ever “sacked for being too creative,” Beauty and the Bees Founder Jill Saunders has a bit of advice—start your own company!

Like many entrepreneurs, to thrive she needed to follow her bliss, developing a business built on her enthusiasm for herbs and other natural ingredients. This led Saunders to move around the world and launch an eco-friendly skincare business before most of her customers knew they needed it.

English by birth, Tasmanian by choice, Saunders spent much of her youth along the English coast in Cornwall and moved to London at 15. She traveled the world in her 20s—working in publishing to fund her wanderlust. Backpacking led to a cross-country U.S. trip, and, eventually, Australia and Tasmania.

Exploring Tasmania by motorbike, Saunders fell in love with the natural beauty, the laid-back lifestyle, the clean crisp air, temperate rainforests, and “the beautiful, rare rainforest Leatherwood honey that I had discovered and fallen in love with on my toast,” she remembers. “I developed the germ of an idea to build a business around this amazing product.”

The unique honey and its beeswax were the basis—and remain the foundation—of her skincare business.

From One Product to Natural Mini-Empire

Saunders began developing the products that launched Beauty and the Bees in a rented house in Hobart. “Initially, I was making a single product—a moisture cream, with honey and olive oil —and I started taking it to the market on my heavily-laden motorbike, where I was sharing a stall with three other girls,” she recalls.

“I later bought a house and continued experimenting in my new kitchen, which I set up as a kind of factory.”

In 1995, the business had grown to the point where Saunders would rent her “first commercial premises” in an old Chinese restaurant in Hobart’s Bellerive quay area.

“I could manufacture in the kitchen and then sell at the front in the store. Then, about ten years ago we moved to our current 10,000 ft. factory. Now, even that is becoming too small with the expansion into the USA.”

“Tasmania is visually stunning and that in itself is a big drawcard. So as you can imagine riding a motorcycle around this sparsely populated, beautiful green verdant island was such a contrast to the hell of big cities. The people in the small communities are so helpful and kind and laid-back compared to the pressure cooker of London,” she says.

“The longer I’m here the more I appreciate the ability to be in nature two steps from my house and five minutes from the beach.”

An Interview with Jill

Settle down with a nice cuppa, and listen to Jill Saunders, Beauty and the bees founder’s story, of a journey from Thatcher’s Britain to peaceful Tasmania and the beginnings of Beauty and the bees, thanks to ABC radio’s Chris Wisbey show October 30th 2016 (Approx. 14 minutes)

Saunders’ partner and head of Beauty and the Bees’ Professor Fuzzworthy men’s hair and skincare brand, American Nat Rew is another Tassie convert whose Yank roots were split in both South Florida and New York City.

Rew’s first trip to Tasmania was during the aftermath of the 2001 9/11 terrorist attack on New York. He was working in an office near the World Trade Center when the towers fell.

“After that, like a lot of New Yorkers, I was shaken. I decided to pick up and go. A woman I knew in New York was Tasmanian; she told me about it and I thought it sounded like the farthest place I could go. So I went,” he remembers.

“It’s so clean here; it’s both a physical and emotional cleanse. You can smell it in the air, the eucalyptus, and the currents from the arctic. Life in Tassie allowed me to reset my life.”

Around 2010, Rew began searching for a more holistic approach to life and business, something closer to a quieter Tasmanian-style lifestyle in the U.S.
Rew’s next projects focused on wellness and the environment starting with an organic vegetable farm in Florida and eventually moving into skincare.

A long-standing friendship with Beauty and the Bees founder Jill Saunders led to him taking over to taking over men’s brand Professor Fuzzworthy, which is now a #1 in a number of Amazon’s U.S. categories.

Today, Rew is focusing on helping expand Beauty and the Bees while making Professor Fuzzworthy as big in Australia as it is in the U.S.

“It’s important to me to support a business that’s in Tasmania, keeping people employed and to create an environmentally positive product.”

He adds, “My friendship with Jill has actually grown as we’ve worked together. She’s incredibly detail-oriented and I’m driven by deadlines and getting things done.”

Get To Know Us 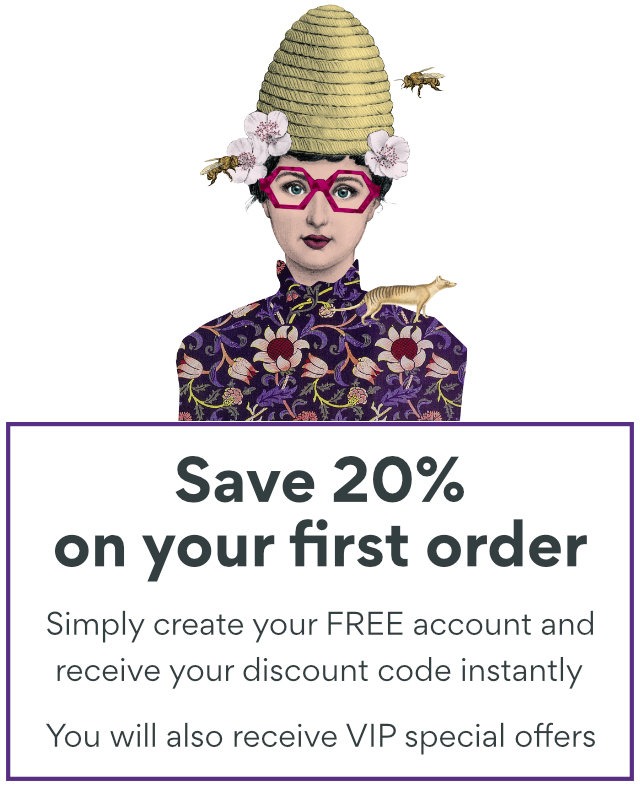 Redeem your points on the cart or checkout page for a discount on future orders.

There is no sign up to take part and enjoy the benefits. As a customer, you will start earning points right now for future orders.

NOTE: points expire 12 month from the date they were earned.

Exemptions:
*The Loyalty Rewards program is currently only available for online orders
*Points are not earned during sales or offers where a discount coupon is used (including the 10% off sign up bonus).
*Guest accounts do not earn loyalty reward points. Simply create your Free account during your first order or click here to register now to start earning points.

*International orders will be calculated on the cart or checkout page

Here is your 10% discount code we promised:

Please copy the code down and use it on the cart or checkout pages. For your convenience, we have also emailed the code to you.